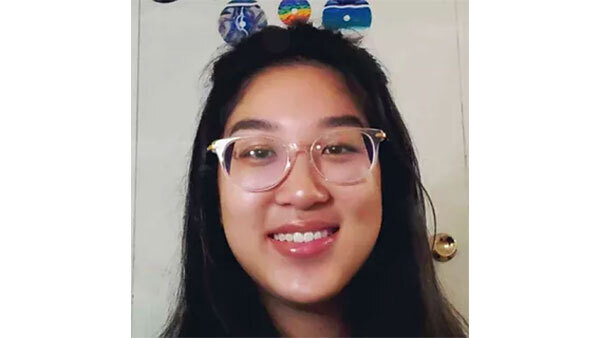 Lyn Tran knew going in that the chances of securing an internship at the University of Michigan Marine Hydrodynamic Lab (MHL) were slim. But the 18-year-old put persistence to work and is now soaking up valuable knowledge alongside U-M students.

Tran has been enrolled in the Early College Alliance (ECA) at Eastern Michigan University since her high school freshman year. She participates in Wolverine Pathways, a U-M program that encourages students from under-resourced communities to overcome barriers to attending college. The program helped her secure a summer job working with young children at a math camp. Two years ago, camp participants took a field trip to the MHL lab, and the lab demonstration sealed Tran's career sights.

“After the field trip, I sent an email asking about an internship at the lab. I was told I had a very small chance of getting the internship because they primarily award those positions to U-M students majoring in Naval Architecture and Marine Engineering,” recalls Tran. “I was persistent in emailing Jason Bundoff (now her boss at the lab) and made a point to express interest in engineering, how I wanted the internship to look for me, and to be a part of their community.”

Tran made her case and is in her second year as an intern, putting in 40 hours a week during the summer months and 10-16 hours a week in the fall and winter. Dr. Ellen Fischer, Principal of the ECA, says Tran is very motivated.

“I have seen many examples of Lyn’s talents and am impressed by her diligence and work ethic,” said Jackson. “Her ability to prioritize, organize, and multi-task contributes to her successes while maintaining a regular work schedule and extra-curricular schedule.”

"Lyn is a unique and highly talented student. She has incredible academic gifts and is extremely resourceful," said Fischer. " She has been part of Wolverine Pathways since middle school and has had her sights set on the University of Michigan for many years. Lyn sought out the intern experience on her own because she was looking for something a little more robust. I think that the team in the lab felt that they might be taking a chance on a high school intern, but she quickly proved that she stands out as an early college student and an exceptional one at that."

Tran is Captain of the Dive/Swim Team at Ypsilanti Community Schools (her home district), and is involved with the ECA Student Leaders, Yearbook Committee, and Diversiteam. She also works as a lifeguard at the EMU Rec/IM building.

The internship has provided Tran with an in-depth learning experience that has enhanced her understanding of engineering.

“What I have enjoyed most about the internship is the emphasizes on learning; they want you to stop and learn why something works and why a particular process was used,” explains Tran. “I have never felt out of place; they include me in discussions and give me special tasks, even though I’m not a U-M student. I did important work, and I never felt my work was less important than the college students’ work.”

She credits the ECA and the MHL for helping her define her career path.

"The ECA gave me opportunities, the academic background, helped define my future goals, and gave me the courage to pursue the internship," said Tran. "The internship has done a good job of helping me to narrow my goals into a specific type of engineering."

Applications should be submitted by Friday, February 17, 2023, to be included in the initial enrollment lottery. The ECA & ECA Academy will still accept applications after February 17th, and students will be accepted into the program based on open enrollment slots per district.

The ECA is hosting Shadow Day experiences for prospective students and families.

This will be a chance for students to shadow a student in ECA high school classes for either a morning or afternoon.

We will provide special programming for parents/guardians while their students are in class, including a Q & A session with the Principal and current students, parents, & guardians.

Shadow Day is for students entering 9th, 10th or 11th grade for the 2023-2024 school year. Students are only allowed to attend ONE Shadow Day per school year.

Please sign up for Shadow Day by clicking: HERE

​Are you/your student interested in attending the Early College Alliance? Learn how the ECA can help you/your student get a head start on college and career while earning up to 60 college credits at Eastern Michigan University — a $30,000 value!  Please join us for more information.

Officials say the event will give insight into careers in science, technology, engineering and math for women. This year's conference includes 500 girls from Southeast Michigan.

Attention Parents & Students: The ECA & ECA 9th Grade Academy is still accepting applications for the 2022-2023 school year! Families are encouraged to apply and students will be accepted into the program based on open enrollment slots per district. Online applications can be submitted by clicking the ‘Apply Now' button below.